“The data shows that the Chicago Gang Database is a target list of Black and Brown people who will be the victims of immigration raids, of incarceration and criminalization, and further policing” – Janae Bonsu, Black Youth Project 100

What is the Gang Database?

“Gang Database” is the name used for the maintenance of information about an individual’s suspected relationship to gangs maintained by the Chicago Police Department (PCD). This information is stored as part of the Strategic Subject List (SSL) and the Chicago Law Enforcement Analysis and Reporting (CLEAR) database.

CPD’s Gang Database is compiled using 18 separate forms, records, and systems of records, with no unified, standalone “gang database.” In 2019, the City of Chicago Office of Inspector General (OIG) found evidence that CPD’s Gang Arrest Cards were of poor data quality and that there were inadequate controls on the entry of information (report). CPD shares its collection of information with over 500 external agencies, including immigration and criminal justice agencies, with no agreements with those external agencies governing access to and use of the data.

The System Cannot be Reformed

Of the 500,000 Gang Arrest Cards recorded, 95% of the individuals designated as gang members were Black and Latinx, with 91.3% of all individuals being male. 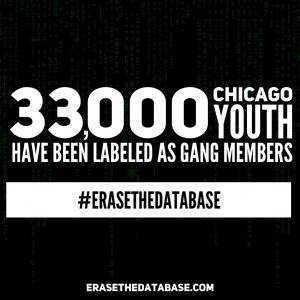 According to OIG’s Report:

CPD does not provide notification to individuals that have been designated as gang members, and there is no way of contesting, repealing or denying false entry.

Being in the Gang Database Can Mean: 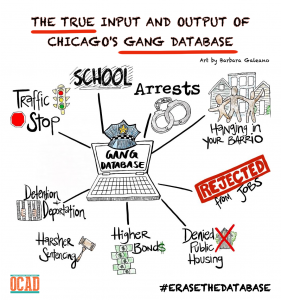