The organizations within the campaign to abolish Chicago’s Gang Database would like to express our deep condolences to the family and loved ones of 13-year old Adam Toledo, who was murdered last week by the Chicago Police Department. For Adam, and the countless others who have lost their lives to senseless police violence, we are committed to dismantling the tools used by the state to surveil and kill us, along with movements that call for defunding and abolishing the police.

In 2019, Chicago’s Office of the Inspector General (OIG) released a report that concluded that the Chicago Police Department’s (CPD) network of gang databases “contain incomplete and contradictory data.” As a result, CPD was instructed to cease using gang arrest cards, and the Chicago City Council was called on to hold a public hearing on this report and the changes CPD was tasked with. Last week, the OIG released a report on CPD’s progress in updating their gang database systems, which names that CPD continues to use gang arrest cards and has made few of the changes they were called on to make.

The Chicago Police Department’s lack of accountability, transparency, and blatant neglect to restructure an openly flawed and ineffective system is unsurprising, yet reprehensible. CPD has made shamefully slow progress towards its own proposed changes to its gang database system, and continues to use the current database that heavily relies on racial profiling, with approximately 95% of those listed being Black or Latinx people. Not only has CPD fallen short of its own commitments, the department has blatantly tossed accountability to the side by misleading community members. According to the Follow-Up report by the Chicago Office of Inspector General, CPD withheld its most recent gang database draft policy from the public eye for almost 8 months after it was finalized, denying community members an opportunity to engage with public policy. This new withheld draft, which would broaden the “circumstances under which district law enforcement officers may enter an individual’s information,” comes after community feedback showed 86% of community comments opposed the creation of any database whatsoever.

We understand that the report findings as further evidence of what we already knew: that the gang database’s only purpose is to increase police surveillance and racial discrimination in our communities. It is unlikely that the Chicago Police Department will ever be accountable to changing a system that is rotten at the core and serves to benefit its own power.

In light of this reality, we hold City Council accountable for failing us on the issue of public safety. A public hearing on the OIG’s first gang database report was officially requested by City Council Members in 2019, triggering the obligation of the Chair of the Public Safety Committee to hold a public hearing, as indicated in the Municipal Code. A hearing was never held. We now demand City Council Members, and specifically Alderman Chris Taliaferro, to respect their community and commitments to serve by hosting a public hearing to review the previous and most recent findings by the OIG in April. It is two years overdue; our communities deserve and demand this basic level of accountability and transparency.

Read our 1-pager breaking down the OIG Follow Up Report Here. 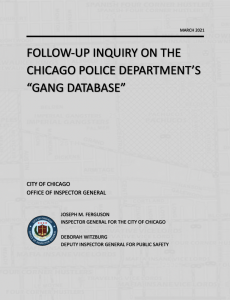 City of Chicago’s Office of Inspector General conducted a follow up report on the Chicago Gang Database to assess CPD’s progress on its commitments to improve the system. Predictably, little to no change was made.  Read the report here. 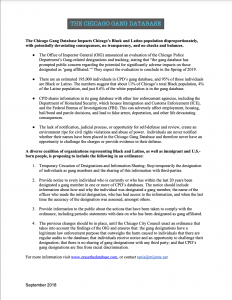 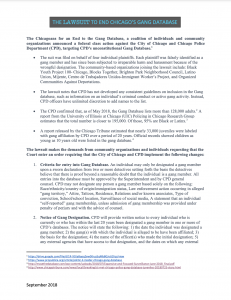 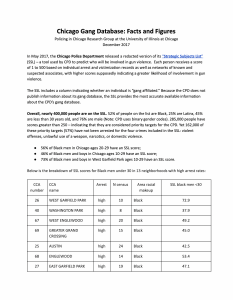 Research conducted under the direction of UIC Professor Andy Clarno revealed that there are 64,948 people in the Chicago area that are suspected to be gang affiliated, 41.6% are Black males under 30. Further more, 13,500 of the people in the gang database have never been arrested for the 3 principal activities that the CPD considers gang-related. Click here for the full report: Chicago Gang Database: Facts and Figures

Abolition After Accountability [Report]
May 2019 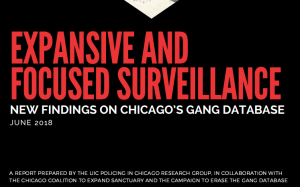 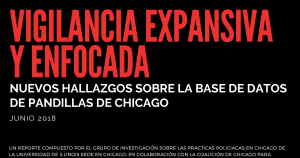 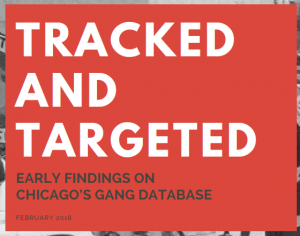 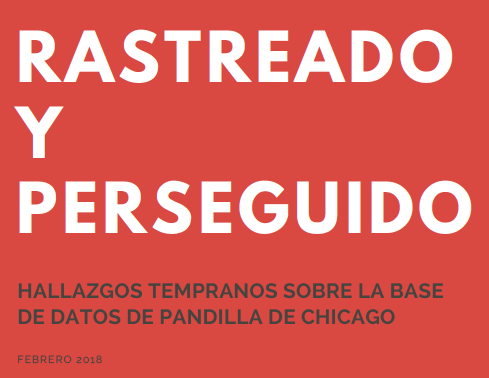 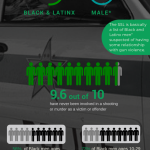 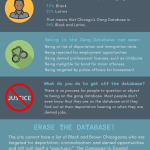