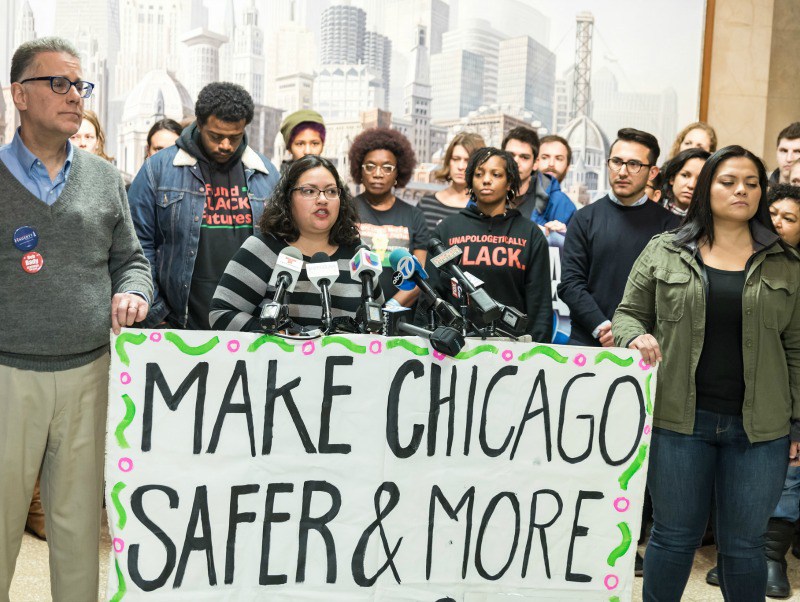 By ALYXANDRA GOODWIN,  originally posted on Black Youth Project on 5/7/2017

In a “broken windows” fashion, the Chicago Police Department sustains a gang database of its residents. They say this is in efforts to stay ahead on crime. They also seek to punish those on the list to the fullest extent of the law when the opportunity presents itself.

As of last week, CPD and it’s gang database are at the center of a recent lawsuit after Immigration and Customs Enforcement (ICE) raided the home of Wilmer Catalan-Ramirez. This happened after incorrect information about him surfaced through this database, identifying him as a gang member. Not only is the department being hit with a lawsuit, they will also be answering to a Freedom of Information Act (FOIA) request about how the database is used. The suit was filed on behalf of BYP100, Organized Communities Against Deportations (OCAD), and the MacArthur Justice Center.

Simply, the gang database is an excuse to justify further surveillance and excessive force against Black and Brown folks in this very sensitive time regarding citizenship.

Background on the lawsuit

On March 27, Catalan-Ramirez was dragged from his home after ICE officers asked his wife to identify a man from a photo they were looking for. That man wasn’t Wilmer Catalan-Ramirez. But, they pushed past his wife through their front door, guns drawn, took him and detained him anyway.

One of the biggest problems with this scenario is that it is unclear how Catalan-Ramirez ended up in the database. He has no known gang affiliations. The FOIA aims to answer that question and others such as: How does CPD share information with ICE? What processes are used to maintain the data and it’s accuracy? What are the demographics of people within the database? And, are there any civil rights complaints – internal or external – regarding those listed in the database?

In a joint press release from OCAD, BYP100 Chicago, and the MacArthur Justice Center, OCAD organizer Rosie Carrasco said “Every time that the Chicago Police Department shares information about any of us with immigration enforcement they are violating Chicago’s promise to be a Sanctuary City and to protect us from President Trump’s policies. The City of Chicago must look at how its policies not only criminalize people of color and feed us into Trump’s deportation machine.”

Sanctuary Cities, legislative changes, and the increase in deportations

“Sanctuary Cities” have become a hot button issue around the country with the current president’s threats of deportation. A Sanctuary City limits it’s cooperation with the federal government around immigration and deportation. For cities like Chicago, that status is important to a large percentage of the population that identify as undocumented. This has major economic implications as we saw in February on A Day Without an Immigrant when over 50 Chicago businesses closed in support.

The threat to undocumented people is a part of a growing trend.

Barack Obama’s presidency marked higher numbers in deportations. That period is often framed as “A Shift from Returns to Removals”, meaning formally removing folks from the U.S. increased in comparison to prior administrations. The idea of returns focuses on individuals trying to enter the U.S. illegally from Canada or Mexico.

However, the immigration and deportation processes under Obama did not start with Obama.

In 1996, President Bill Clinton signed the Illegal Immigration Reform and Immigrant Responsibility Act into law. Human Rights Watch says this law “eliminated key defenses against deportation and subjected many more immigrants, including legal permanent residents, to detention and deportation.” The IIRIRA criminalized immigrants by allowing the government to detain and deport them for a range of nonviolent criminal convictions. By September 11, 2001 the processes and tools under the IIRIRA were fully resourced and functioning to further criminalize Brown folks in America.

In 2002, the federal government signed agreements with local and state law enforcement agencies to give them powers of immigration enforcement locally. Then, in 2003, the Department of Homeland Security was established, increasing the number of ICE agents from 2,700 to 5,000. ICE is currently authorized to employ 21,000 agents with the current president looking to increase that number by 15,000.

One of those agreements between the federal government and local agencies is the gang database in Chicago. It is hard to track down information about the database’s origins or how many names are on it. But, this is something the FOIA will hopefully change and illuminate publicly.

How the gang database is being used today

The question emerges: how can ICE raid homes, detain, and deport people in the Sanctuary City of Chicago?

Well, individuals listed in the gang database are not protected by the sanctuary status of a city, of course.

Both the BYP100-Chicago chapter and OCAD are in coalition to expand the definition of sanctuary for Chicago residents. The goal: to further protect Black and Brown people targeted by police and state violence – undocumented or not.

This isn’t to amend or reform aspects of the gang database. The purpose is to eliminate it completely.

The MacArthur Justice Center notes that – nationwide – these databases are tools of racial profiling. Worse yet, they are often inaccurate. The gang database in Chicago is another justification used to harshly enforce law and order that upholds the oppressive interests of white supremacy. It also asserts white supremacist ideals as to who is good enough to stay within the U.S. and who the “bad hombres” are who should be criminalized, detained, and/or deported. Eliminating the gang database in Chicago will serve as an example of how to reverse policies and funding that have incrementally and violently challenged the livelihood of Black and Brown folks across the country.

“If Chicago is serious about real sanctuary and ending criminalization for all it’s residents, releasing this information is a minimal step towards that end,” said Janae Bonsu, BYP100 National Public Policy Chair in the joint press release. “The gang database has allowed for the rampant targeting of Black and Brown people in Chicago with no accountability for too long. We’re requesting these data as a first step towards bringing the functions of the database out of obscurity,” she stated. 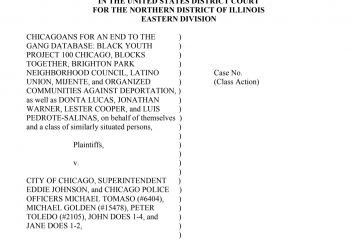 At least 195,000 individuals – 95% Black and Latinx – are listed in an error-filled database from which their names can never be removed. Chicago – The Chicagoans for an End to the Gang Database, a Read more… 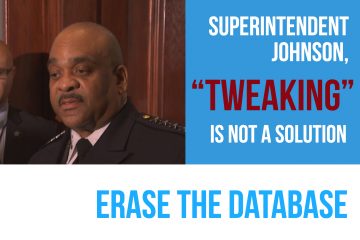 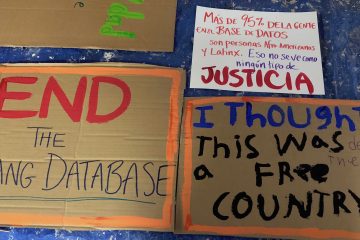 FOR IMMEDIATE RELEASE March 22, 2018 The investigation comes after more than a year of campaigning for Chicago to be a real ‘Sanctuary’ for its residents by, amongst other demands, eliminating the Gang Database. Chicago, Read more…