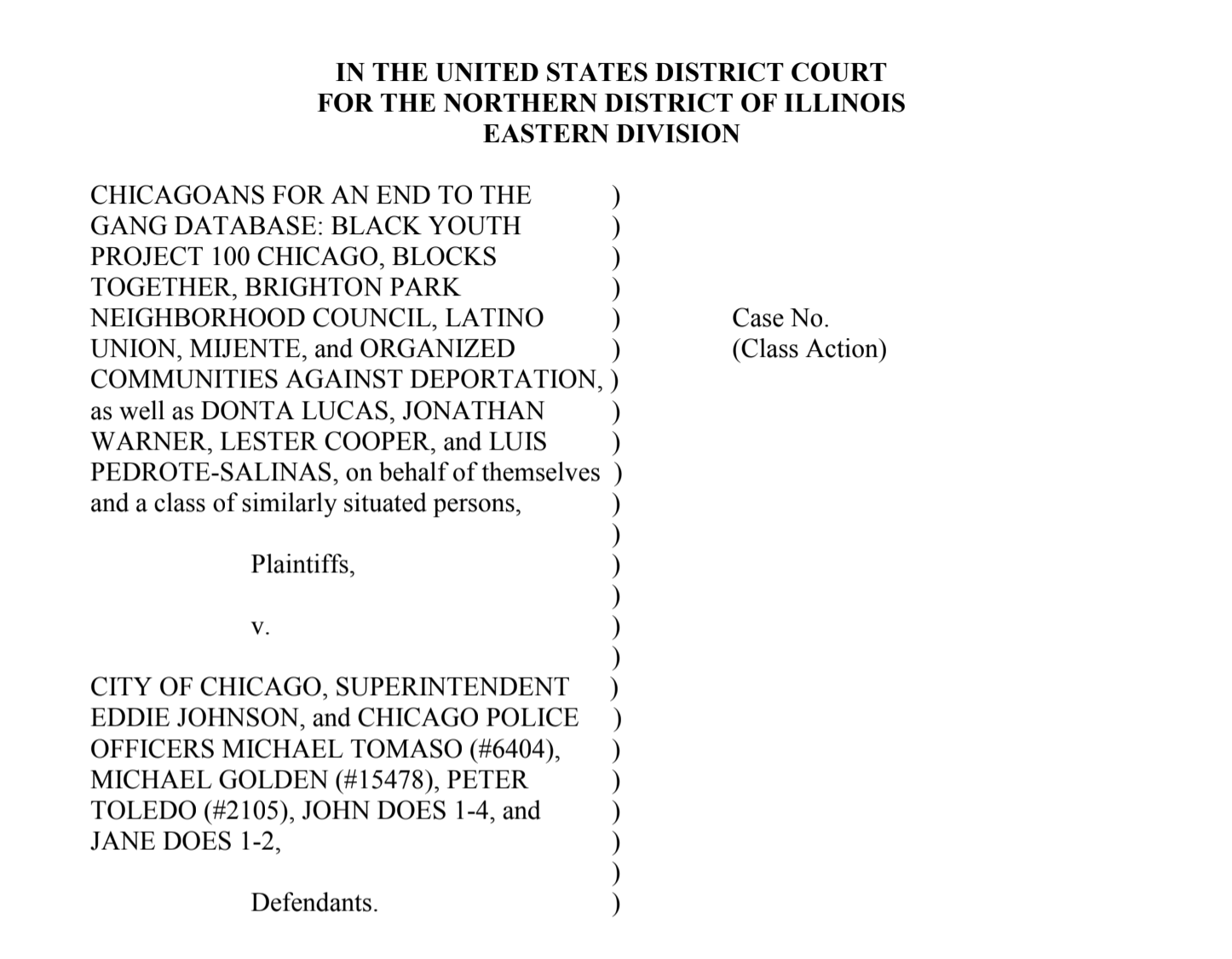 At least 195,000 individuals – 95% Black and Latinx – are listed in an error-filled database from which their names can never be removed.

Chicago – The Chicagoans for an End to the Gang Database, a coalition of individuals and community organizations, gathered in City Hall on Tuesday to announce a new federal class action against the City of Chicago and Chicago Police Department (CPD), targeting CPD’s unconstitutional Gang Database, and urging City Council to take action.

The suit was filed on behalf of four individual plaintiffs, three Black and one Latino. Each plaintiff was falsely identified as a gang member and has since been subjected to irreparable harm and harassment because of the wrongful designation.

“The Chicago Police Department documented me as a gang member when I was just 14,” said Lawrence Vaile, one class member. “The police would stop me and ask me what gang I’m in, they would slap me for lying to them because the computer shows them I’m in the gang. This put me in danger from the cops and from the streets.”

“This database hasn’t led to positive change for the Chicago communities directly impacted. Our tax dollars should not be spent on instruments of racism, or on tools that criminalize and scapegoat people of color.  Chicago’s so-called problem with violence is rooted in our city’s problem with racism and inequality.  Our resources should be used on the tools, projects and initiatives that enhance our communities, bring ordinary people together, and allow us to prosper”, said Todd St Hill, Member of BYP100.

In addition to using the database to harass and falsely detain people, CPD provides its incorrect, inconsistent database to third parties. This shared, inaccurate information triggers further repercussions that can include job loss, denial of access to public housing and public education, inability to secure certain licensures, ineligibility for bond, and possible deportation.

“As long as the Gang Database continues to indiscriminately add Latinx and Black Chicagoans to their list, Mayor Emanuel cannot call Chicago a Sanctuary City for anyone. Making Chicago safe for immigrants starts today with making sure that the gang database stops being a  list of people for ICE to pick up during immigration raids,” said Tania Unzueta, Policy Director for Mijente and one of the organizational plaintiffs.

The lawsuit notes that CPD has not developed any consistent guidelines on inclusion in the Gang database, such as information on an individual’s criminal conduct or active gang activity. Instead, CPD officers have unlimited discretion to add names to the list.

“CPD has long been on notice that the Gang Database discriminates against Black and Brown Chicagoans and violates people’s constitutional rights by creating barriers to employment and immigration relief, subjecting people to unlawful detention and searches and seizures and constant police harassment and surveillance. The gang database is riddled with inaccuracies and serves no legitimate law enforcement purpose—all it does is further institutionalize CPD’s well documented policy and practice of racial profiling.”  Said Vanessa del Valle, counsel for the Plaintiffs in the lawsuit.

The CPD confirmed that, as of May 2018, the Gang Database lists more than 128,000 adults. Although data on juveniles was not released, a new report from the University of Illinois at Chicago (UIC) Policing in Chicago Research Group estimates that the total number is closer to 195,000. Of those, 95% are Black or Latinx.

The lawsuit makes the demands from community organizations requesting that the Court enter an order requiring that the City of Chicago and CPD implement the following changes:

The lawsuit was filed today in the U.S District Court for the Northern District of Illinois and alleges multiple violations of due process protections under the U.S. Constitution. The suit also alleges that the manner in which CPD gathers and disseminates false information about gang membership violates the Illinois Civil Rights Act, which prohibits racial and ethnic discrimination. Defendants include the City of Chicago, Chicago Police Superintendent Eddie Johnson, and several officers within the Chicago Police Department. Additional attorneys for class include Elizabeth A. Homsy of the Law Office of Elizabeth A. Homsy, Sheila Bedi of the MacArthur Justice Center Northwestern Pritzker School of Law, Brendan Shiller, Chris Bergin, Tia Haywood of Shiller Preyar, LLC. and Joey Mogul of the People’s Law Office.